It seems fitting that after such a variety of landscapes that our tour ended in an incredible spot in South Africa called Highlanders – a camp ground surrounded by vineyards in South Africa.

Highlanders – view from the campsite

Eating space at Highlanders – one of the nicer spots

I travelled with Intrepid again for this tour, after an incredible trip in East Africa, visiting the Gorillas a few years ago. Again, it was incredibly well organised and I ate better than I would usually with incredible cooking by our cook, Mike. Every day breakfast would be an array of cooked food, cereals, fruit and more. Lunches were a mix, some days sandwiches/salad and other days a mix with pasta or something else. Dinners were always different, often with soup to start off with. If it was a birthday, there was always cake and our tour was lucky enough to have 3 birthdays (including mine) in the space of just over 3 weeks! 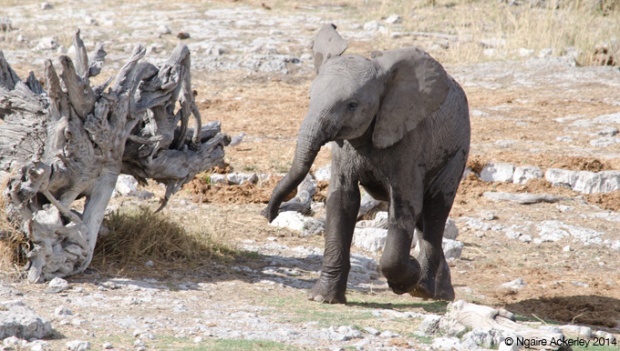 The group was made up of couples, friends and a few single people packed into the bus at the maximum size of 22. This meant there were lots of people to talk to and you were rarely bored. It did however mean it wasn’t a lot of fun when you were trying to charge electronic items in the truck or get to your locker. We rotated seats of the truck each day so we all got to experience different views and leg space. The people were a great bunch and on the whole I think most of us got along pretty well. Some had already done two legs of the trip (Nairobi, Uganda, Rwanda and then Nairobi to Vic Falls) which meant they had much more of a bond than the 9 of us that joined in Victoria Falls. I think this was the only downside of the group, because I don’t think we ever connected as well as the others did.

I was paired with a really lovely Aussie/American girl who didn’t snore very much and was very mature for her age, so it was a relief to be sharing a tent with a great stranger. Likewise I sat next to a friendly Swiss on the truck who created some incredible movies with her photos, so that was always great to watch and chat to her, while most other people slept.

Our Intrepid Tour Group at Spitzkoppe

It was a bit strange for me, going from solo travel to group travel and yet still feeling a bit like a solo traveller at times, but I think that’s more to do with me and the people, rather than the tour itself. Having a knee injury is never fun when walking is involved, particularly when you’re afraid of falling from high locations. I didn’t let that stop me, but it did slow me down.

Sunset over Spitzkoppe with the group

The tour went through some incredible landscapes and locations. I was blown away by how diverse Namibia is. I had no idea what to expect from Zimbabwe and Botswana and was pleasantly surprised by how green they were. The bugs were not nearly as bad as when I’d been volunteering, which was comforting (yes I know I still have South America to come yet). The campsites were pretty incredible compared to when I went to East Africa. In these ones most of the time we had toilets and showers and even a pool!

You quickly got used to ‘bush toilets’ on the side of the road as we drove, but that no longer fazes me either. Truck days would consist of most people sleeping (I’m very tempted to publish a video of this) and me reading and working on my blog. These days would usually only be 4-5 hours and then we’d have the afternoon to relax by a pool. There was the odd longer one, but given the size and height of the truck, I never felt motion sick which was great.

I think the highlights that stood out ranged from taking a mokoro (dugout canoe) through reeds near hippos in the water, sandboarding down the dunes in Swakopmond, sleeping outside under the stars in Spitzkoppe and celebrating my birthday with a sunrise on Dune 45 (despite how freaked out I was) and visiting the incredible Dead Vlei. Seeing wildlife was still a big part too. Etosha National Park didn’t disappoint and seeing elephants and zebra up close when walking around the Okavango Delta was also something to remember.

I definitely think I need to do more of Kenya and Tanzania – ideally the second leg that the other people did from Nairobi to Vic Falls. Their tour sounded amazing and the wildlife around the Serengeti was incredible. That may have to be when I get to Madagascar in a few years time.

Chris, Mike and Ben, did a great job at leading, cooking and driving us, so I can still comfortably recommend this tour with Intrepid as I do the East Africa one. They were great to chat and laugh with and were always there to help if you needed a hand with your tent or a hand down a high boulder.

If you fancy checking out my posts from the tour, I’ve listed the links below.

Touching down in Zimbabwe to see Victoria Falls »

Walking with lions in Zimbabwe »

Going bush in the Okavango Delta »

Scenic flight over the Okavango Delta »

Meeting the San Bushmen of Namibia »

In Namibia, but somewhat transported out of this world in Spitzkoppe »

Happy Birthday to me: Visiting the famous Sand Dunes of Namibia »

Fish River Canyon, one of the biggest in the world »

I hope to squeeze in another post (or two) about Cape Town and the spots I visited around there before I left Africa for South America. It’s going to back to hoping for good internet connection and time to blog frequently, but it is worth checking back every few days in case I don’t have time to sort out social media for each post!

← Fish River Canyon, one of the biggest in the world
Sights of Cape Town →