Face to face with a silverback (East Africa: Part 3) 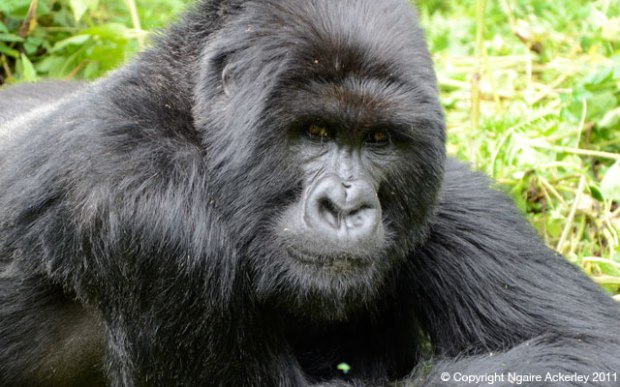 Exhausted, stepping through the brush I suddenly became spellbound. Sitting just a few meters away were the most incredible creatures on earth that I’d ever met. There they were, a group of gorillas grooming each other known as the Amahoro group or “Peaceful group.” Then as the guide kneels down on the ground, a furry little baby gorilla starts tumbling (literally) around enticed by our guide who was chatting away to it. Our gorilla guide has taken some famous people to see the gorillas in the past, as we walked up the mountains, I saw why he is a popular guide as he tore away at tree trunks and jumped around from time to time like he was part of a gorilla group. 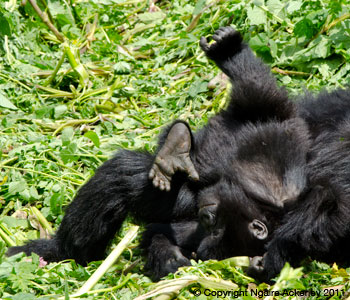 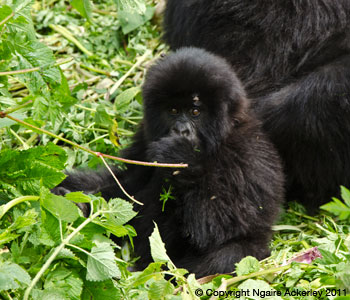 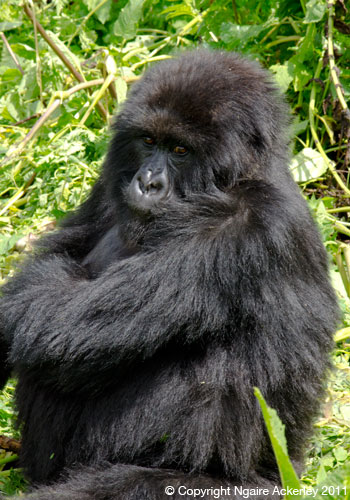 Having experienced more heartbreak the day before at the Kigali Genocide Museum it was a warm welcome to see such peaceful animals so very happy in their own habitat rather than in zoos. After this trip I haven’t been back to a zoo and I doubt that I’ll ever enjoy a zoo again, knowing how much space and freedom these animals need and deserve. Rwanda is one of the most lush countries in Africa and here at Volcanoes National Park the Gorillas can roam safely. While they are still a major target for poachers, the team at Volcanoes National Park do tours with the public to see the gorillas in a safe situation, that in turn, helps fund the security of these incredible animals.

Before the trek you’re split into small groups and are faced with a trek anywhere from 2 to 6 hours before you find the gorillas. You’re joined by a guide and a couple of trackers that carry guns and machetes to create a path through the bush when needed. They have some idea of where the gorillas are but these animals have their own mind so they move as they wish. Suited up, I wore waterproof trousers followed by rugby socks to keep out the ants (they bite here), along with a jacket and gloves to avoid some plants and trees that can sting you. This combination of clothing makes you feel like an sci-fi excessive gardener on a mission to a place out of this world. Which to some extent is true, as it seems like you’re in another world because these unusual giant creatures are just lying about in the sun without a care in the world as you wander nearby. 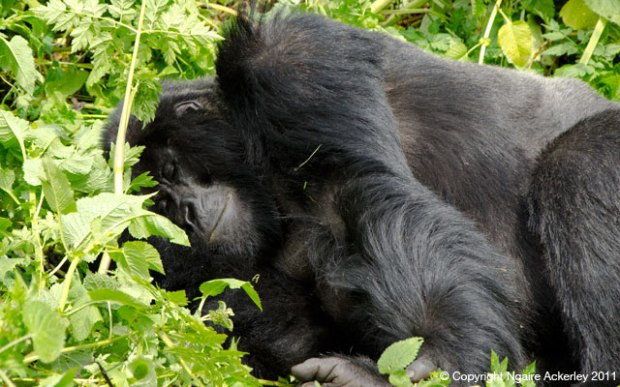 The Amahoro group of gorillas were about a 2.5 hour trek away uphill through forest and bush for us. Mud was a given and we were pretty lucky to avoid rain most of the way as Rwanda is known for its rain (hence why the countryside is so lush and green). The trek gets you high into the mountains and as I found eating and drinking regularly is a must unless you want to feel dizzy while you encounter the gorillas (one day I’ll learn). 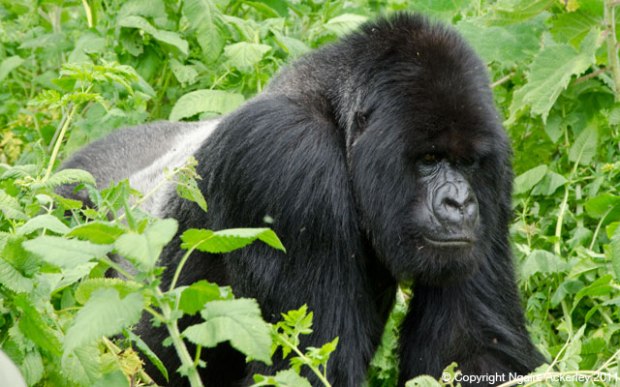 Within the Amahoro group there is a massive silverback gorilla – you can tell he’s the leader of the group from his sheer size and the silver fur running down his back. He’s one guy that you wouldn’t want to complain to about the hair on his back, that’s for sure! While he strides past, you can see the solid muscles in his body that could squash you if he had a spare moment to care that you’re watching him. This group of 8-10 gorillas (at the time I saw them) including a little baby are all very used to people being around them. You’re told to stay a few meters away, but that won’t stop the gorillas deciding to come close. As one point one gorilla brushed past the guy standing next to me. I’d like to say we took it in our stride, but I’m pretty sure there was a moment that he was freaking out, since you’re not meant to move when they come near. As we wandered around the clearing, the gorillas just continued to groom themselves, eat and play as we watched on for an hour. 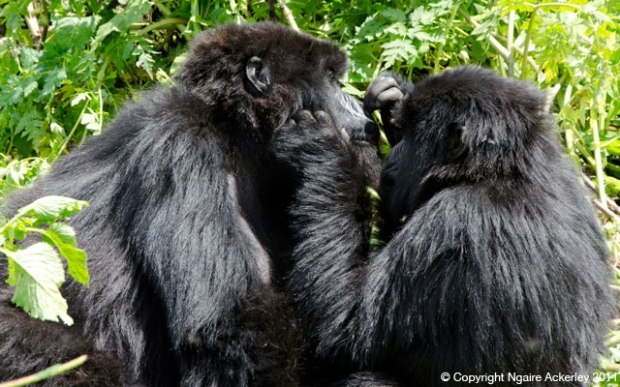 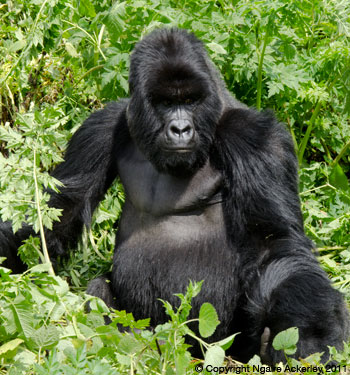 Seeing these animals in their natural habitat is a once in a lifetime experience. Although for my sake I hope to be able to do it again one day, as it was one of the most incredible experiences I’ve ever had and I’ve travelled a decent amount in the last few years, so that is saying something. Reading Dian Fossy’s book ‘Gorillas in the Mist’ really does describe the experience with gorillas well. It’s sad to think how endangered these peaceful furry beasts are, but hopefully with more caring people in the world, they will still be around for a long time to come.

This ends my East Africa adventure, following Rwanda as I mentioned in my last post, I returned to Uganda to bungy jump and white water raft on the Nile, finishing an amazing journey with a bang. Obviously seeing the gorillas was the highlight, but along the way I met some amazing people and saw some incredible scenery and wildlife too.

When I was planning this trip I didn’t know what to expect of the safety and ease of transportation around East Africa. So, I decided to do a tour called ‘Gorillas, Chimps and Gameparks’ with Intrepid Travel. Travelling with Intrepid in Africa was great, I had a small tour group that travelled by overland truck with a local guide, cook and driver, all of whom were fantastic. I ate better than I generally do back in London the food was that good! Because it was low season (November-December) each person on the truck had a few seats to themselves so it meant we could easily go from one side to the other when something caught our attention. As I’ve said in my posts, camping wasn’t nearly as bad as I had expected and with the occasional optional upgrade we didn’t have to always camp if it rained.

I highly recommend visiting East Africa as it will etch an incredible memory in your mind to remember for the rest of your life. So don’t be scared of the wildlife, hygiene, bugs or camping. As Mark Twain said,

“Twenty years from now you will be more disappointed by the things you didn’t do than by the ones you did do. So throw off the bowlines, sail away from the safe harbor. Catch the trade winds in your sails. Explore. Dream. Discover.”

If you’d like to see more of my photographs from this trip, please visit the galleries in my photography portfolio »

16 thoughts on “Face to face with a silverback (East Africa: Part 3)”