Sometimes things just go wrong. Then they continue to go wrong. Then you don’t care any more that things go wrong because at least you’re in a lovely different country experiencing something new. To some extent you even begin to laugh at how much more can go wrong despite all your planning.

So, it all started with spilling coke on myself at the airport. It was like someone had shaken that darn bottle before I purchased it. I cleaned myself up to the point that it looked like I’d wet myself just as my flight was called to be board. That was mistake number one.

Aboard the lovely not-so-low-cost airline Ryanair (it was a bank holiday weekend so flights were not cheap) I sat down next to the window looking forward to having a good view as I wasn’t going to be too rushed getting off the plane when I arrived in Spain. Well, I was wrong there. The plane sat on the tarmac for an hour and a half while the pilot had issues with a light bulb, then the replacement one didn’t fit, so the waiting continued  some more. That was the second thing to go wrong.

Arriving in Malaga, Spain over an hour late, I’d missed the bus I had planned on taking to Granada. However, I did manage to spot the final night bus that was about to leave. After rushing over to it, I soon realised that the bus driver didn’t speak English and didn’t allow you to purchase tickets on board the bus. I ran into the station like a madwoman as the bus driver waited for me to try buy a ticket, yet no ticket windows were open at that time of the night so I opted for the machine. Except the machine said that the bus has already gone and I couldn’t buy a ticket. Less be said I ‘tried’ to convey this to the bus driver. That was the third thing to go wrong. Eventually a nice Spanish passenger that spoke English came to my rescue and helped me get a ticket that the driver would accept. I made the entire bus late and the driver rather annoyed.

Two hours later in Granada the taxi driver takes me to my hostel. He drops me off on the street and points up a dark alley implying my hostel is just up there. Riteo, that can’t be to difficult right? Sure enough. I got lost. Picture a dodgy kiwi girl with a backpack and sunhat knocking on random doors, until a passerby pointed me in the right direction. That was mistake number four.

In the hostel I find my locker is broken and doesn’t get fixed the entire time I stay there, despite my asking. Good thing my camera didn’t get nicked at night. Number five.

So that is just about all that went wrong for a few days… besides the sixth thing to go wrong being that despite getting a female dorm room, nearly every female in my room snored every night which left me sleepless on several occasions.

My first proper day in Granada was spent wandering around the streets with some Aussies (seems Aussies are everywhere when I travel) and a Brit in the morning since my walking tour was cancelled (number seven).

We found some amazing graffiti spots with an artist that was really incredible. You could say he was the Bansky of Granada. Wandering through the streets around Granada I noticed how cute they are made of little stone paths that are often sheltered to from the sun to keep you cool, by the way the houses have been built close but privately in squares with courtyards in the centre.

The rest of the afternoon was spent wandering around the Sacromonte quarter that sits high up overlooking the rest of Granada. Here I found two American girls that I’d seen at the hostel that morning, together between the rain showers we wandered around and found the great viewpoint, San Nicolas Mirador, that looks out towards the Alhambra and city below.

View from San Nicolas Mirador towards the Alhambra, Granada, Spain

In terms of hostels Oasis was a pretty good one. I met plenty of nice people there as well as plenty of young inexperienced travellers (less be said about that point). The staff were friendly and hosted a dinner party of Paella one night which got me tasting something I wouldn’t normally order because of the seafood/chicken/vege mix going on all at once. However, for the record, it is yummy, but prawns are just annoying to pull apart and eat.

The next day I did a walking tour with a young inexperienced traveller from New York. In the afternoon the mistakes continued on. Two weeks ago I had pre-booked a ticket for the Alhambra, the main attraction in Granada – a palace and fortress that sits high up above the city. Thing was, this ticket was booked for the following weekend (mistake number eight) and tickets are hard to get. So I opted to just do the gardens with the American girl and then try asking the hostel if they had any tickets for the actual palace for the next day in the hope that they had some left. Luckily the gardens were beautifully laid out and had amazing views. 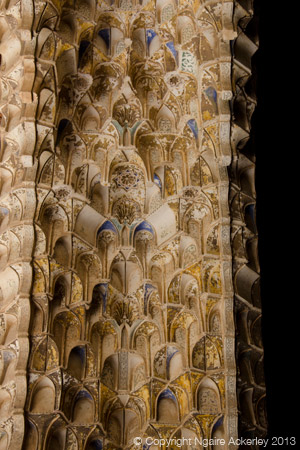 I’d managed to get the last ticket for the Alhambra for the next day – the day I was leaving. So that was great. Sometimes good things come out of bad things. The palace had incredible and very different architecture to any I have seen before. I can understand why it was a must-see attraction in Granada.

Following this visit I figured I had plenty of time before my flight so I wandered the streets and had some tapas – one of the great things about Granada is if you order a beer you get a tapa free. So they feed you to keep you sober enough to order more beer! Brilliant idea, I wish more cities did that! Letting the barman pick your tapa for you can also mean you get their favourites, so I was always pleased with the food.

Coming from New Zealand I am generally used to the 12 hour clock. So from time to time the 24 hour clock can be known to confuse me. It turns out when I figured I needed to leave Granada at 16:00 to catch my flight – that isn’t 6:00pm. For those who don’t understand 16:00 is 4:00pm. I shall one day learn this. This meant that I once again missed a bus, because I needed to take a bus to Malaga and then another to the airport. This bus happened to have the same bus driver as a few days before, who looked at me in horror when he saw me. Embarrassed to say the least as I wave my ticket at him. I was over an hour late when I arrived in Malaga. Mistake number nine.

I had caught the 6:00pm bus for a flight that was meant to close its gates at 8:30pm. It took the bus over an hour and a half to get to Malaga. Then I found the local bus stop to the airport. I waited. And waited. That was the tenth thing to go wrong. The local bus didn’t come. I gave up after 15minutes and rushed to a taxi that socked me 20 Euros for a 10-15min cab ride to the airport. On arrival I ran to the desk to get a visa stamp (good old Ryanair regulations), I had gone to the wrong desk to begin with, number eleven. I continued to get stressed waiting to get through customs and passport control. Massive line. I waited. Mistake number twelve. When the airline started calling final boarding I decided to skip the queue and ask if I could go through in front of everyone.

Sure enough I get through and Ryanair has a massive line of probably over 50 people waiting to board. Why? Because they were asking nearly every person to weight and check their hand luggage to be the correct size. I hadn’t packed very carefully had I? I managed to get my bag in the baggage frame but then struggled to get it out because my Europe adapters were sticking out. Meanwhile the boarding attendant was getting annoyed and told me I’d have to check it in. I flat out refused and proceeded to unpack and re-pack the stupid chargers into a spot that meant my bag would fit nicely in and out of the baggage frame. In the process several items sprawled across the floor which made the situation even more unpleasant. That brought me to the unlucky number thirteen thing to go wrong.

The journey however did end relatively well. I waited in the non-EU immigration line at Stansted airport for only about 30-40 minutes (in the past this has been known to reach up to 2 hours) and proceeded to catch the train and the last tube home.

I keep telling myself when things go wrong its all part of the experience… but lesson learnt. Never buy a Coca-Cola before a flight and never fly with Ryanair again unless the flight costs pennies. When Ryanair is late or something goes wrong, it really goes wrong unlike other airlines that sort issues out faster.

On a more happier note, if you’d like to check out more photographs of my Spanish getaway take a look at:

← Face to face with a silverback (East Africa: Part 3)
A Cathedral, Canals and Coastline →

5 thoughts on “When travel goes wrong”