It’s all part of the experience

When bad things happen it sucks, but what my travels have taught me is that when things go wrong an experience comes from it and with that, a story to share. I prefer not to think of it as bad luck, but just becoming a well-travelled person with some good stories to share.

It seems fitting that on the anniversary of my three years from the day I left New Zealand for my OE (overseas experience) back in 2010 that I should reflect on my first few days out of the country on my first proper solo travel experience that lead me to the phrase that I now live by when things go wrong I just tell myself ‘It’s all part of the experience’.

Looking back over my travel journal, one of my first entries I wrote describes a guy I met during my transfer from Bangkok airport to my hotel. I described him as ‘brave’ travelling all around Asia on his own. Who would have thought that I’d end up doing 90% of my travels alone! Brave is an interesting word. Some people used that for me when I told them I was leaving NZ with no job, no permanent accommodation and nothing really planned. Some also have said that about this story, but really I wasn’t brave, I just managed to realise that not many travel experiences can be as stink as ending up in hospital on day three of your journey, having had this experience has helped me put things in perspective and made me a more confident traveller.

Okay, let me back up. You’re wondering how did I end up in hospital on day three of my travels?

Well, I started roaming the Bangkok streets during the political protests of 2010 without much thought, seeing lots of temples, rats and soldiers with guns, not sure whether to feel safe or concerned about the need for guns. That evening of day two I found myself sick as a dog in my Bangkok hotel room. (Sidenote: I hardly ever stay in hotels, and despite this one being a 4 star, I’d say it was lucky I didn’t find any rodents in my room.) Anyway, when I say sick I mean as sick as I’ve ever been. I thought it was food poisoning or worse, shaking and crawling to the bathroom is no fun. The next day I remembered my little one year old nephew was sick the morning I left New Zealand two days earlier… I managed to get in touch with my sister and sure enough the entire household were sick as dogs. It wasn’t food poisoning; it was an incredibly bad baby virus of sorts – not that I really found out exactly what it was (note to self: stay away from sick babies in future if I’m about to travel). 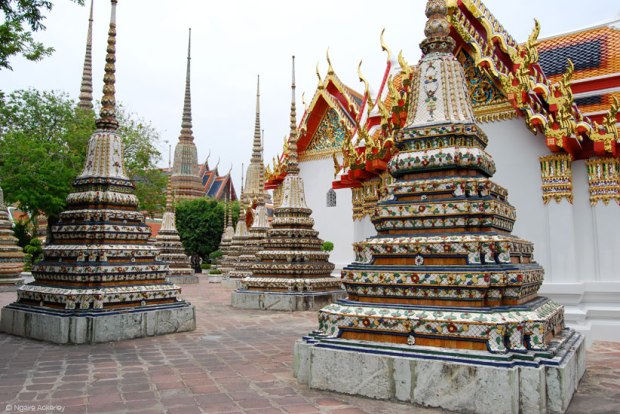 That day I was due to fly to the beautiful island of Koh Samui and after being told by my travel insurance that I’d need to get a hospital letter and cancel my own flights etc. myself I decided it would just be less hassle to get on the plane to Koh Samui and deal with my illness there. Before then I’d never been able to sleep on flights, but that one-hour flight I don’t remember because I was out like a light.

Sure enough my three days in Koh Samui were not spent doing elephant treks or island boat tours like I’d hoped. Instead I was in a hospital with no proper diagnosis and hardly anyone that spoke English and a few friendly cockroaches that died a painful death-by-IV-fluid-machine. It came to the day before I was meant to fly to Sweden and I was still struggling to eat, but I forced some rice down so that the doctor would let me leave. As I left I asked what food I should eat since I had such a weak stomach. The doctor told me ‘soft food’, when I asked for him to elaborate I was told ‘bananas’ and he reiterated ‘soft food’. Well that was helpful, pretty sure some soft curry wouldn’t have been suitable, so bananas became my staple for the next few days.

During my one afternoon in Koh Samui out of hospital, I decided to get a relaxing Thai massage as I gazed along the calming ocean. Turns out Thai massages are closer to getting beating up and pulled in all directions rather than getting a relaxing massage…

So when things don’t go exactly to plan, just think ‘It’s all part of the experience’.

← It all starts somewhere
Chasing the Northern Lights →

4 thoughts on “It’s all part of the experience”