Just over a week ago I had the pleasure of visiting one of my favourite places on earth, a spot of stunning nature near where I grew up: Mt. Maunganui.

This was the first time in close to 3 years since I’d been to this location, despite the winter clouds the sun peeked through and it was an amazing walk. I’m not sure if it’s me, the things I’ve seen and experienced or my new appreciation for life, but nature really shone through to wow me.

The new boardwalks along Pilot Bay were quiet and the harbour was calm. Little wind blew through, but with my cosy London jacket and Scottish scarf, I was warm.

I took my time walking around the mountain. For once I didn’t check the time of when I started or finished. I just made an effort to take in everything around me. The gravel path that goes around Mt. Maunganui is flat and safe, with trees on the mountain and grassy pastures down to the ocean. Soon enough I began to hear birds and the most iconic New Zealand bird of all: the Tui.

Sitting up in the tree, dancing from side to side of the branch it wasn’t bothered by me standing just below. It sang it’s little heart out and puffed the white tuff on it’s neck to show me how pretty it was. I don’t think I’ve ever been so close to a Tui without it flying away. After some time I considered taking a video to share with you all, but more people came along so you wouldn’t have been able to hear the beauty of the Tui very well through the talking. I’ll try again in the future.

Mt. Maunganui and the bay between it and Matakana Island

Strolling along I heard the ocean slowly moving in and out against the rocks, sometimes waves crashing, exploding white froth and then creeping away. The waters were blue and shone when the sun came out, reminding me of the crystals I imagined on the sunny ocean when I was in Greece.

I’d been told there were sea lions around the side of Mt. Maunganui from time to time and soon enough I noticed a head bobbing up and down in the water. A brown body would pop up as it moved along, swimming near the shore. If that wasn’t enough, a few meters further and I notice a man peeking down below the path on some rocks. While the birds continued to sing I too looked down to find a sleeping young sea lion on the rocks below. It was quite far up from the ocean, it must have wanted some peace and quiet. Sheltered by a few trees, hopefully not too many people pestered it. 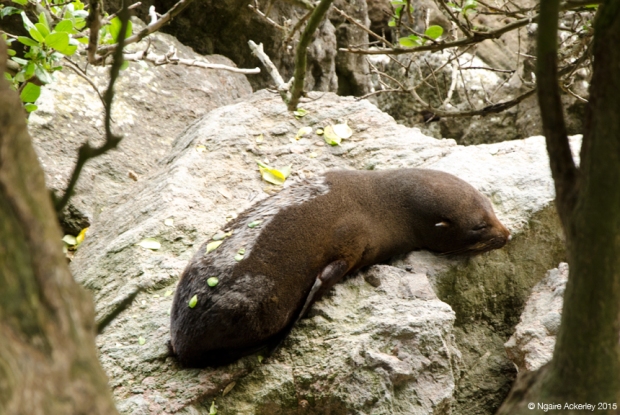 Trees and rocks along Mt. Maunganui

Walking around the other half of the mountain more Tui’s sang high in the trees, leafless trees reached over the path to make it feel like walking through a tree tunnel, with the ocean behind. The sun came out properly and the waves crashed more and more as I came around to the surf side of Mt. Maunganui. It was peaceful and lovely.

Ocean and rocks around Mt. Maunganui 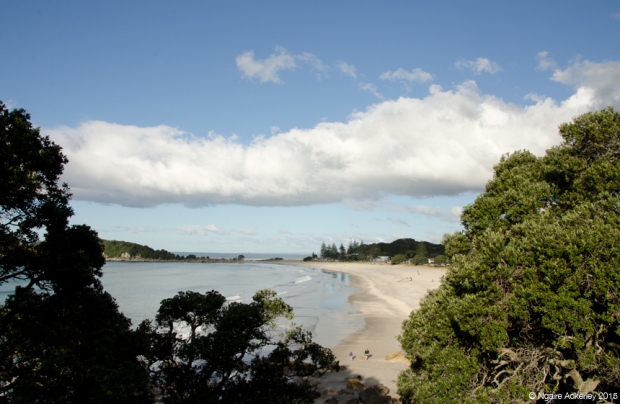 It’s not too often that I have really taken the time to appreciate nature in such a way. This was the perfect place to start. When I really took time to notice all the things around me and really appreciate them it filled me with happiness, I truly am so lucky to live in such an amazing country.