Adventure sports: some of the best moments while travelling

Jumping from planes, running off cliffs, falling off bridges, pounding through rapids. Some of the most thrilling moments and scariest to make you know you’re alive and kicking.

‘This might be your only chance ever to jump over the Nile – you’ve got to do it!’ a German girl on my tour tells me as I shake with fear vowing not to bungy jump from a 44m bridge in Jinja, Uganda. Sure enough her words of ‘your only chance ever’ were what I needed to hear. What if I never return to Uganda? The world is a big place and there are so many amazing places to see. So opted to go third out of five (had to be sure the chord worked). I stood on the ledge, eyes shut, holding an arm because I was too short to reach the wooden roof of the platform. ‘Don’t listen to the countdown, just the word bungy,’ the man tells me. I knew I had to open my eyes to the experience and do it first time, otherwise I’d never have the guts. So on ‘Bungy!’ I leaped out (which from the video looks like I just fell) and plunged down waiting for the chord to stop me. It’s all over pretty fast and then I just spin around and around and around as the blood rushes to my head and I am waiting to be pulled down.

Amazing thing is this wasn’t the scariest part of my day. Immediately after the five of us (who were game enough to jump) had jumped, we rushed off to hit the grade 3-5 rapids that the Nile offers travellers in Jinja. Sure enough what nationality is the rafting instructor? I’ve course he’s a entertaining adventurous Kiwi guy, or at least he thought he was entertaining… We went over about half a dozen rapids and he opted to plunge us right into the center of the rapids every time to ensure we tipped out. 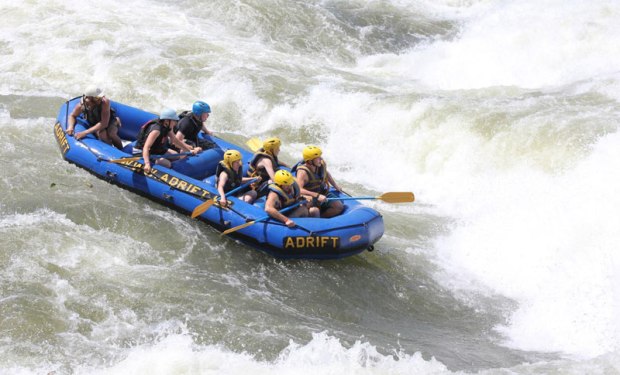 White water rafting in Jinja, Uganda through the Nile river

To see more images from Uganda check out my photography gallery »

When you tip out into a rapid you go through moments of worrying about which way is up because the water is tumbling all around you so much. On the second rapid I somehow ended up on rocks which grazed my knees nicely (adding to the bruises that I continuously gave myself on the trip in Africa). Just as we got our breath back we headed right into a grade 5 rapid. Plunging down into a very deep tumbling rapid I got scared. How the hell do I get out of this rapid? Which way do I attempt to swim? Then, hold on… I can feel water all over my head. Touching my head, my helmet had gone. This was the first time I saw my life pass before my eyes. All I could stupidly think was how angry my family would be when they found out I die in a rapid from cracking my head open on a rock because I lost my helmet. It sounds silly, but it honestly was one of the scariest moments of my life. Thankfully that didn’t happen, while the power of the water in the rapid had ripped off my helmet, I had managed to steer clear of rocks and another girl handed me a paddle to grab onto as I floated down the river until one of the instructors was able to help me.

So white water rafting was an experience to say the least. This experience didn’t stop me doing it again in some much more placid waters in Bosnia the following year. 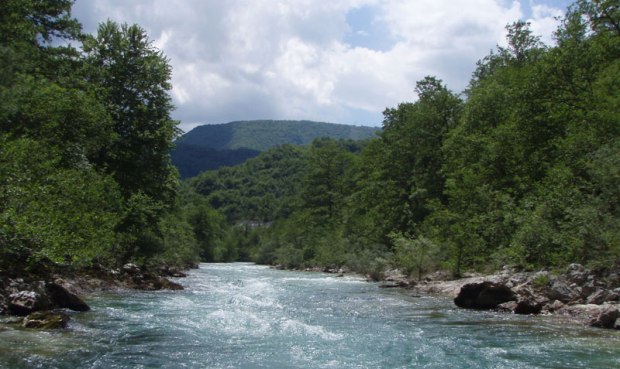 My interest in extreme sports started with a tandem skydive. I asked my sisters to go in on a jump as my 21st birthday present. Leading up to my birthday I made sure I got laser eye surgery so that I would be able to see the scenery clearly for miles… whats the point in doing it if its all blurry right? Sky diving was scary to begin with too, but when you’re strapped to an experienced jumper – you really have no choice and just go with the flow. What they didn’t warn me was that if you do turns on the way down as you look over the beautiful Lake Taupo in New Zealand, is that you can get air sickness. As my feet hit the ground, my stomach decided it was back up about 15,000 ft. I held out for quite awhile, but caved about 10minutes before landing on the return flight into my brother-in-law’s local airfield, then continued to be ill for several more hours. 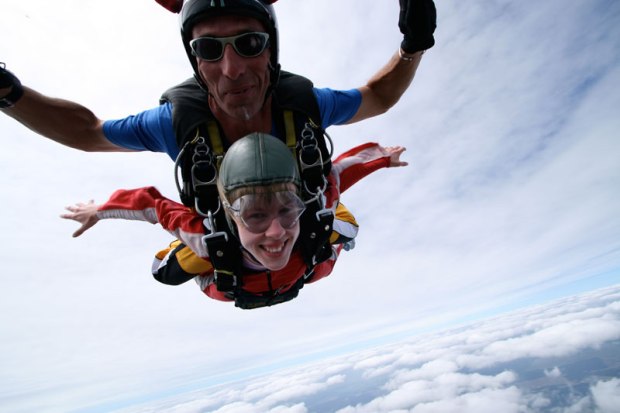 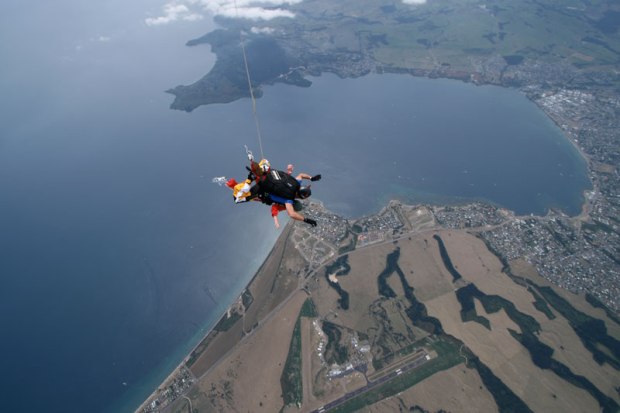 Beautiful isn’t it? If you’d like to see more of New Zealand, visit my photo gallery here »

But still. It was exhilarating! That free fall where you can’t feel anything but yourself gushing through wind and clouds is awesome. This lead me onto my second adventure sport to try: Paragliding. I chose to run off a high mountain from Vogel in Slovenia. Still attached to a professional we found thermals and glided up and around the mountains and valleys of the Bohinj area in Slovenia. I loved it because it wasn’t really scary and you still had that feeling of being free bobbing around in the air. 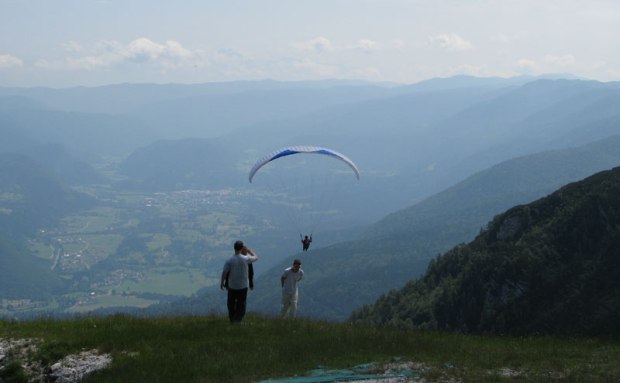 Following on from this I decided I needed to round it off with hang gliding in Interlaken, Switzerland. May as-well do these things in different countries right? All part of the memories! Unfortunately of all these sports hang gliding was my least favourite. Holding onto a bar attached to a few wings then running off a hill all you do is go down. It is a lot harder to catch thermals in hang gliders than it is with a parachute in paragliding. However, doing a zip line on the ‘First Flyer’ 2480 feet down the Swiss Alps in Grindelwald was pretty awesome. 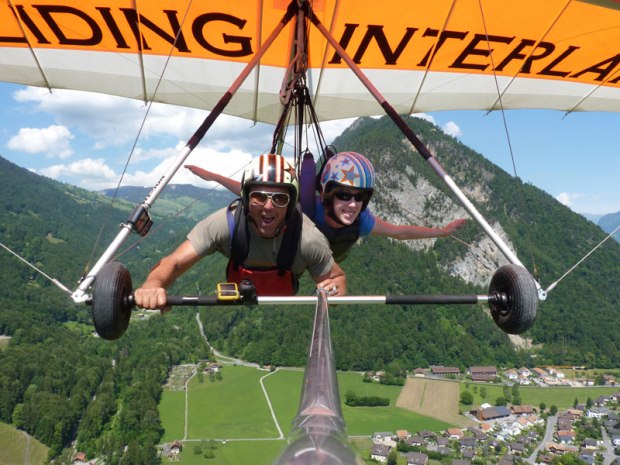 Then there is the more placid hot air ballooning in Turkey, over the fairytale chimney’s in Cappadocia at sunrise. Stunning scenery to say the least. No gas bottles blew up during this journey I’m happy to report. 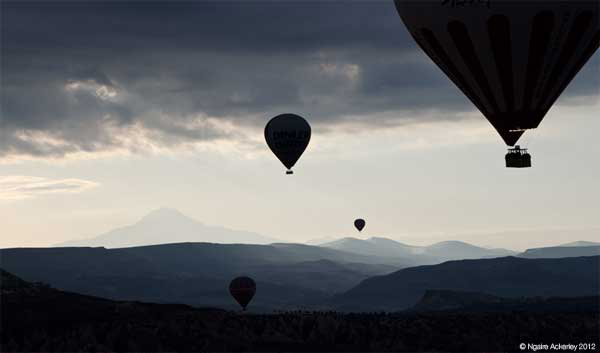 Visit more of my photography from Turkey here »

What’s next? Not 100% sure. I’d love to skydive or paraglide in the Swiss Alps and maybe even learn to paraglide myself. Then there is bound to be more white water rafting in Canada at some point, not to mention the amount of adventure sports that my home country of New Zealand offers. As difficult as bungy jumping was, I always thought I’d do it in Queenstown,  NZ. I’m not sure what got me interested in these sports, whether it was abseiling as a kid, or black water rafting in caves in Waitomo in New Zealand when I was young, or maybe its just growing up in a pretty gutsy country. I guess I just enjoy doing new and interesting things and putting myself out of my comfort zone to remind myself that I am indeed ALIVE and KICKING!

Have you considered doing adventure sports on your travels? What’s been your best locations and sports?

← Most memorable night’s sleep while travelling
The Homeland →

5 thoughts on “Adventure sports: some of the best moments while travelling”