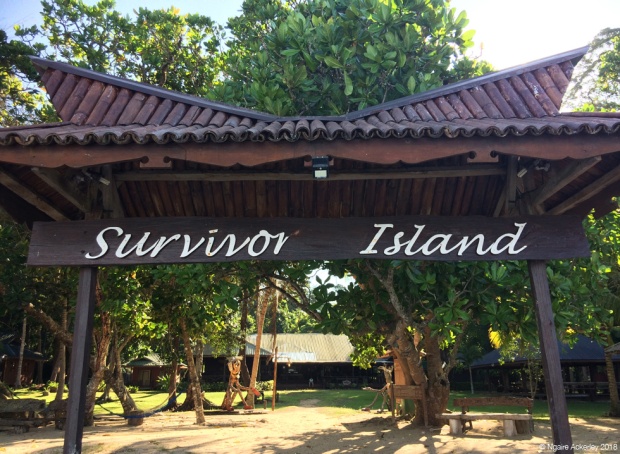 Pulau Tiga in Borneo was the location for the first season of Survivor. This was the next location on the Borneo itinerary for me and it definitely was an improvement on the 2 day jungle hike in the rain with leeches prior (read my last post here to wonder what the heck I was doing). 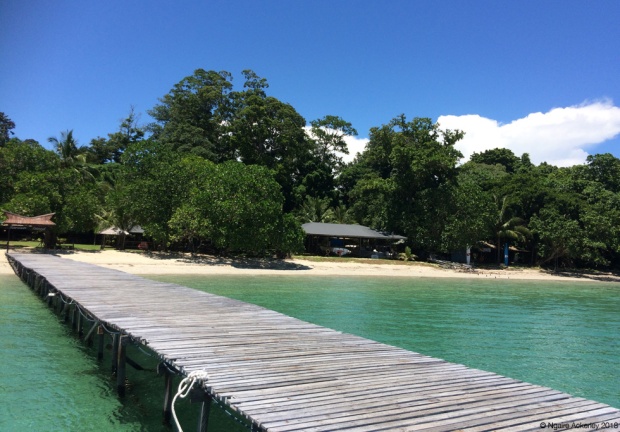 Pulau Tiga, a breath of fresh air. The water was warm and clear, we spent most of our time lounging around in the water, though we did also manage to go snorkelling too! 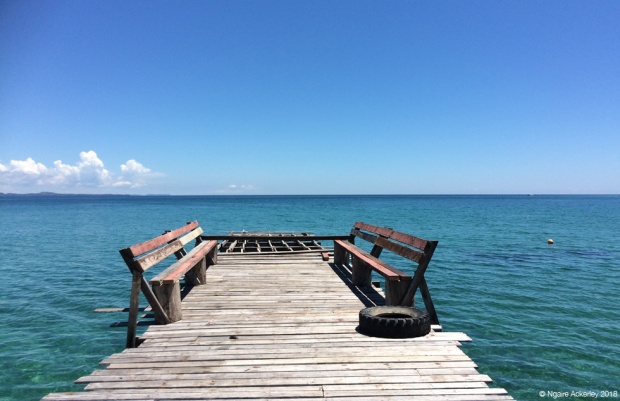 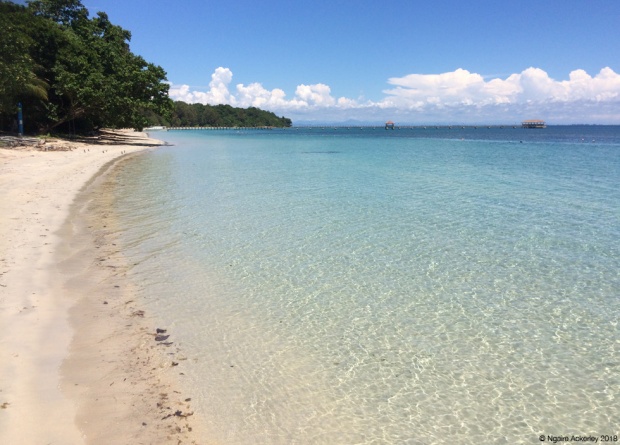 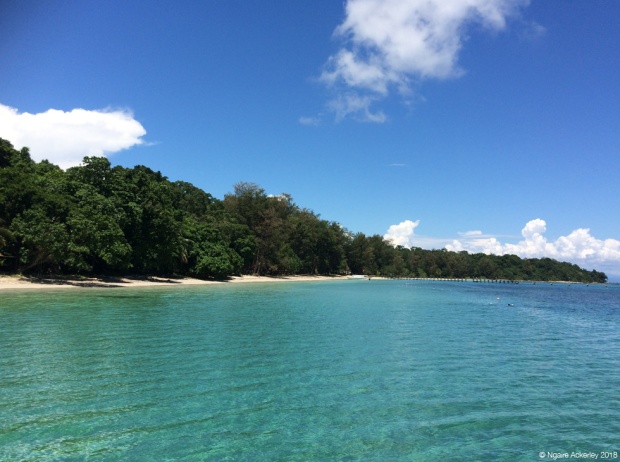 The water really was this colour! Pulau Tiga, Borneo 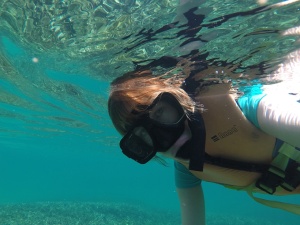 Me donning the snorkel

Snorkle-wise the water was still lovely and warm. It was beautifully clear and I didn’t see rubbish in the water in this location.

Fish-wise, we saw all the Finding Nemo characters and some fish that actually loved the camera.

Videos in this post are best seen in HD (in the settings cog). 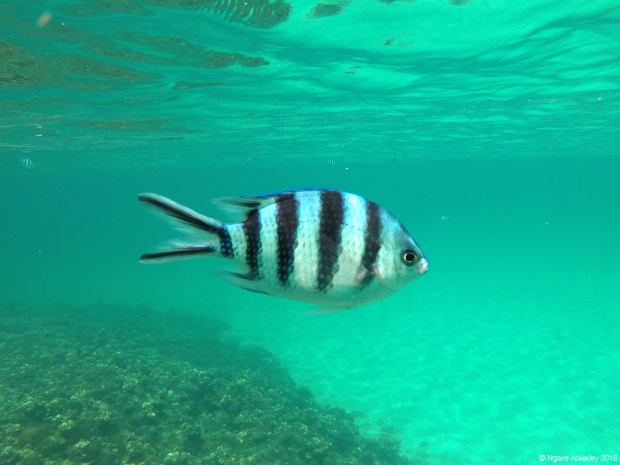 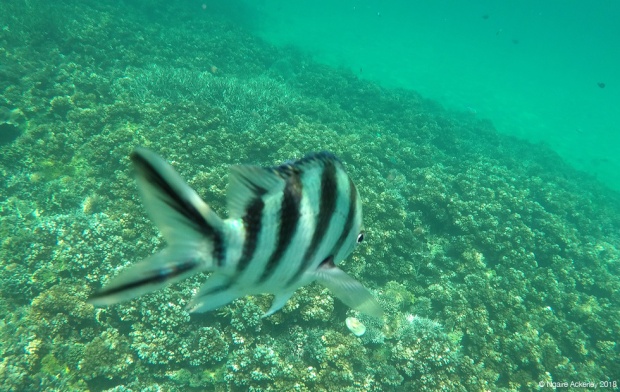 Here’s a video of some very active butterfly fish:

Or maybe you fancy some clown and colourful fish?

The little twin huts were pretty cute – yet basic, we didn’t spend much time in our rooms so that didn’t matter too much… well unless you were the girls on the tour that had incredibly large and noisy geckos visit in the middle of the night… 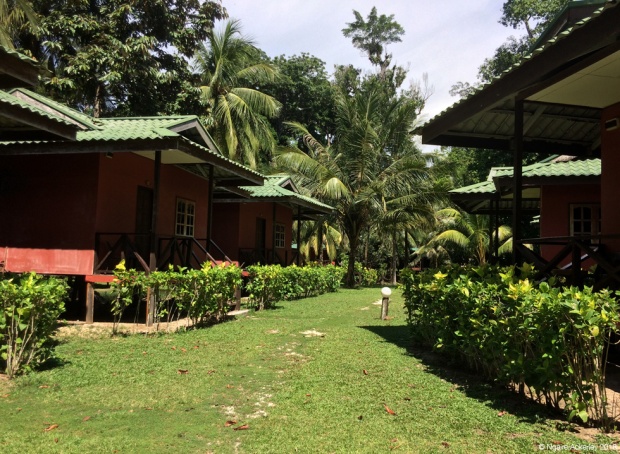 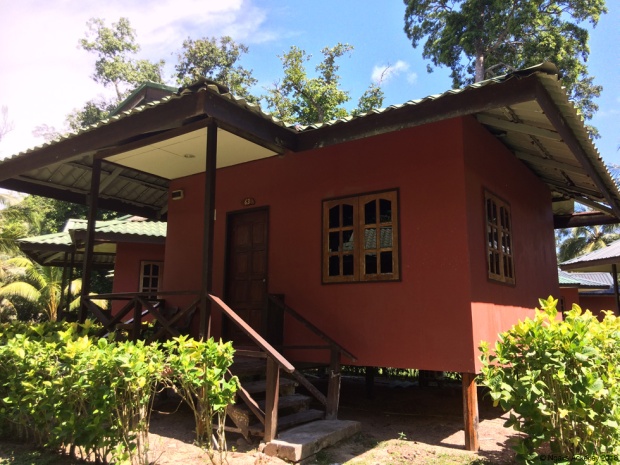 Our hut for a few nights

The island was home to naughty monkeys that you had to watch out for at mealtimes, monitor lizards that wandered around without a care in the world and the typical nightly crabs, rats etc. 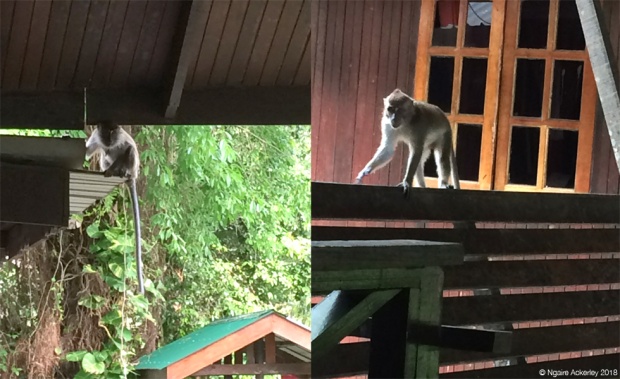 Naughty monkeys – excuse the poor quality photo, only had my phone on the island

Watch a monitor lizard in action (slow action that is) below:

Now you’re thinking oh yer… survivor must have been real hard… well this was where the staff evidently stayed, so I assume the cast were on a more remote part of the island.

When it rains it pours

Yes we experienced torrential rain in the jungle, but here were experienced a proper electric storm that lasted a few hours in the evening. It lit up the whole island!

Here’s a video showing the storm lighting up the entire island:

Yes evidently is was a good idea to go looking for sea snakes (we’d already seen one in a tree, I didn’t need to see more)… but Snake Island was quite pretty! 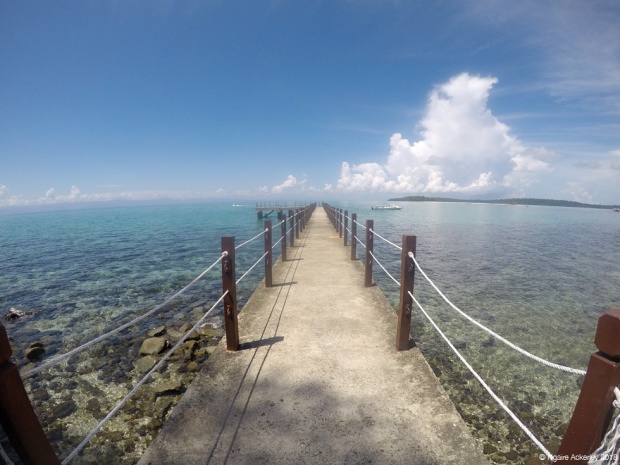 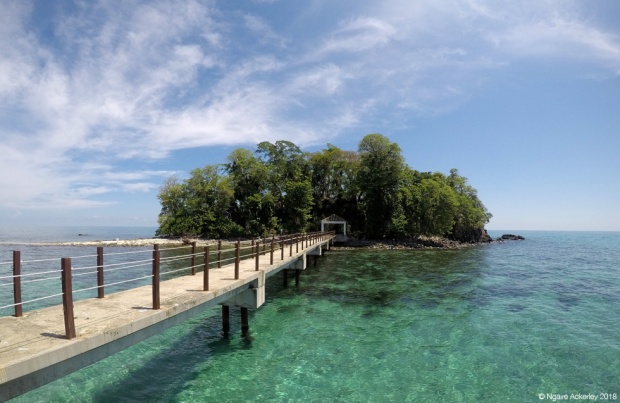 The sunsets and food

The sunsets were lovely, watching from the beach and pier we saw the sky go pink each night before returning to the eating area for our nightly buffet dinner. They catered for 3 meals a day, plus an afternoon snack/tea break. Not that we really needed it, this was total relaxation and a lot of down time. The food was diverse, including the staple rice that was part of every meal I think we had in Borneo. We were overloaded by carbs by the end of the tour!

The sunsets were incredible: 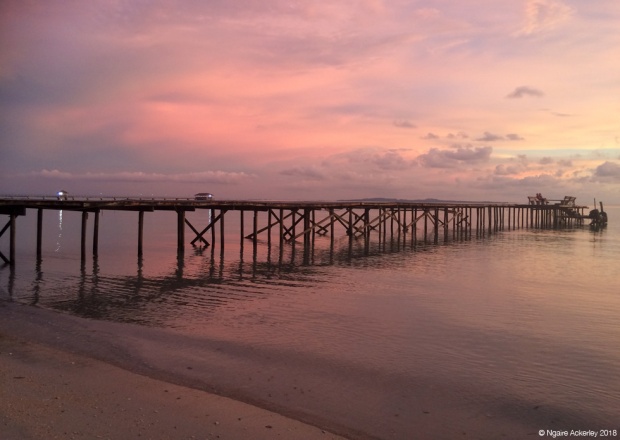 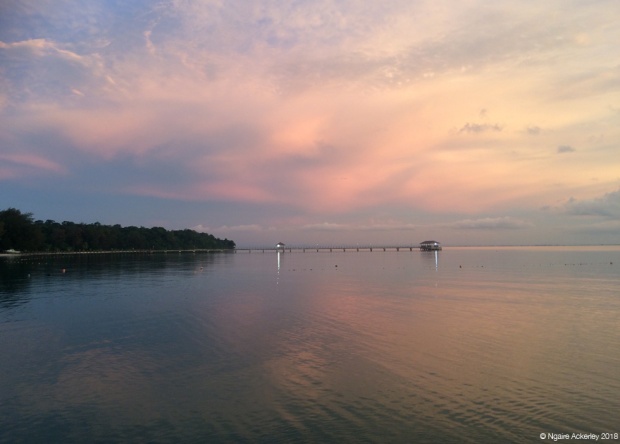 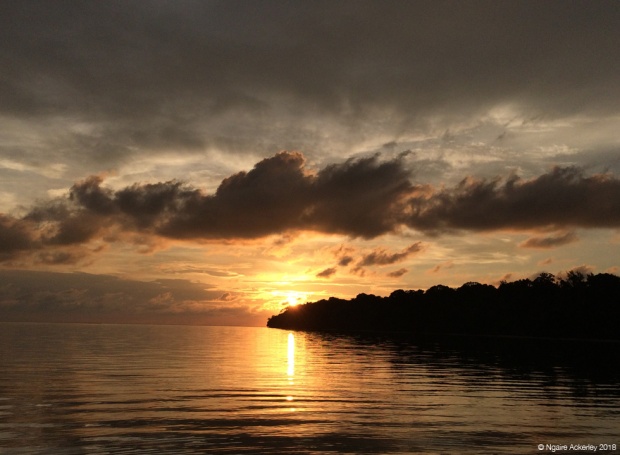 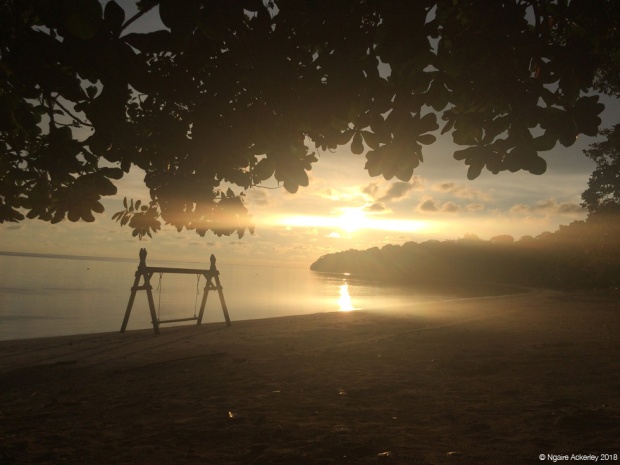 Swing as the sun sets in the distance, Pulau Tiga, Borneo 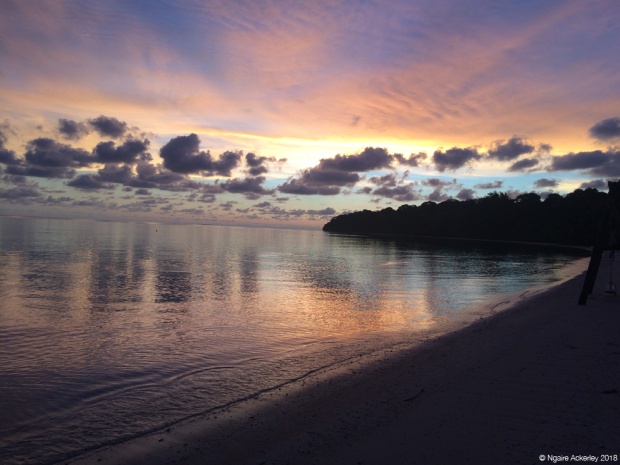 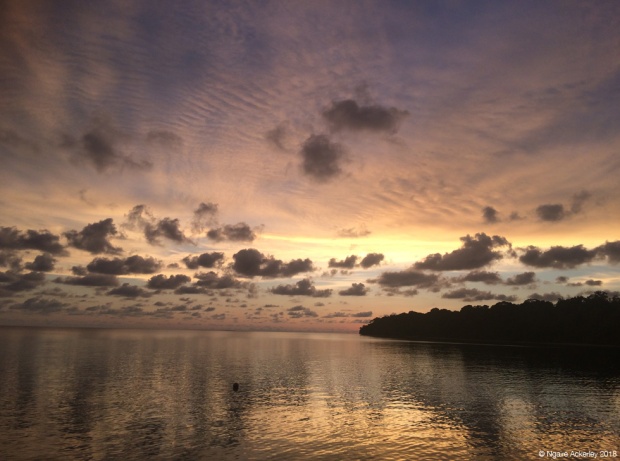 Pulau Tiga was probably my favourite area in the tour. There wasn’t much unique wildlife and the accomodation wasn’t amazing, but the setting was beautiful… as long as you didn’t walk past the main beach area of 10-20m and find the array of rubbish that lined the shore… I’ve left that photo out.

But here a few WTF photos to end on… 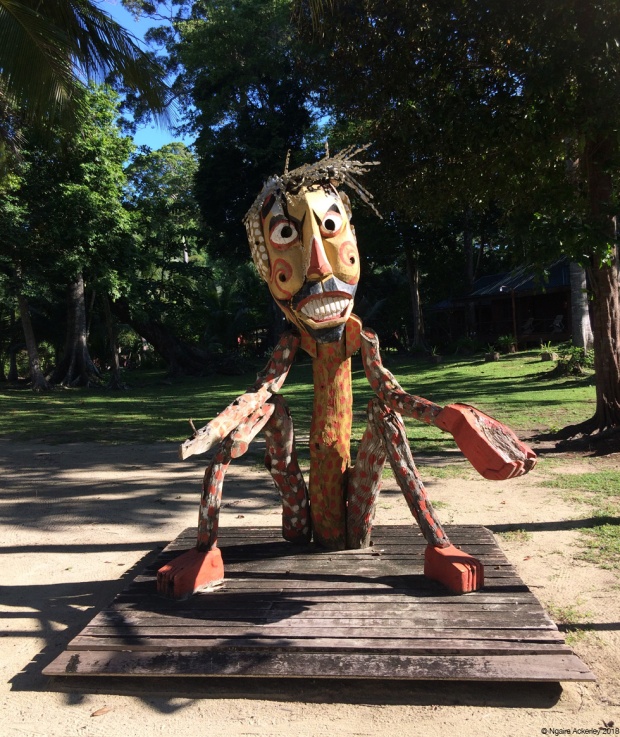 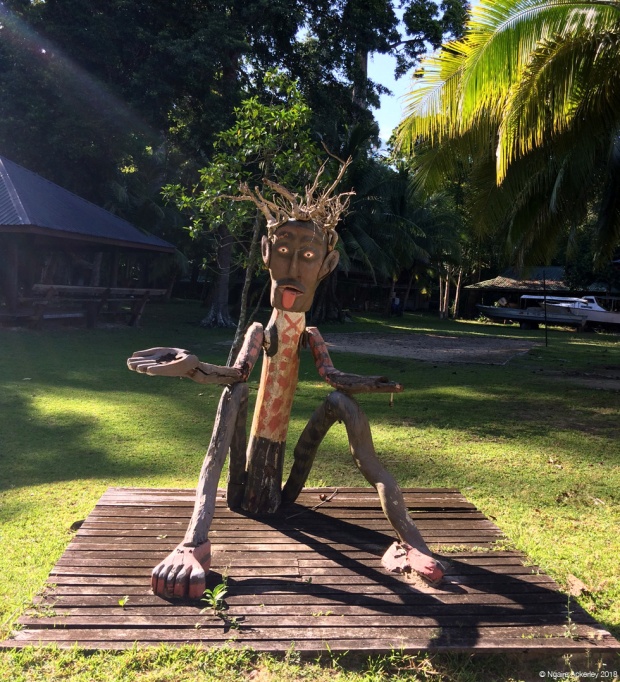