Adventures in the snow

Nine years on and I return to a winter wonderland known as Mount Ruapehu in the middle of the North Island of New Zealand. It’s cold, white (and rocky) and exhilarating. 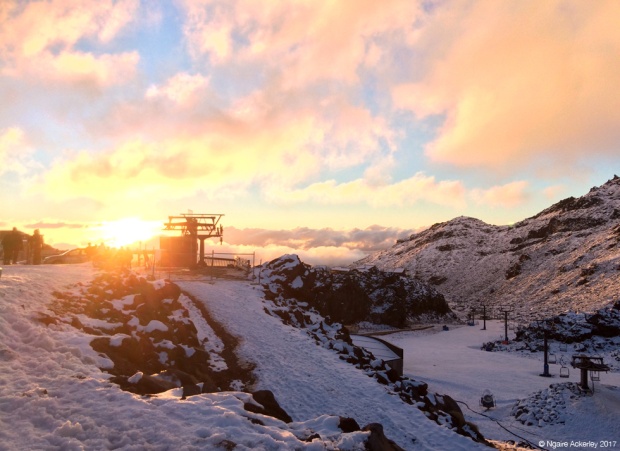 When my sister mentioned she, her husband and two boys were going to the snow, I could join if I wanted, I thought, gosh I never have anyone to go to the snow with, why not?!

They were all kitted out with ski gear and I was to be the lone snowboarder (or attempted snowboarder). A workmate opted to give me a beginners lesson at Snow Planet in Auckland in advance and I’d prepped myself with all the necessary clothing. We opted for the 3 day beginner pass with lessons and gear included, which covered us for the beginners areas in both Whakapapa and Turoa (good luck foreigner-readers trying to pronounce those)!

Note: Whakapapa is pronounced more like ‘Fuk-a-papa’ and no I’m not swearing.
Turoa, is closer to ‘Two-row-a’ if you don’t have the Maori tongue to pronounce it perfectly.

We ventured down for a long weekend, staying in Taupo the night before. The mountains hadn’t yet had a decent dumping of snow, but the beginners area in Happy Valley was covered ‘just’ enough. Each day we had lessons and despite the first one feeling incredibly slow, I slowly learnt the basics of snowboarding.

Turns out school holidays aren’t the best time to visit the mountain though… come lunchtime it was packed and many people opted to walk back up the valley rather than wait in line for 30min for a chair lift.

By day 3 we ventured out to the other side of the mountain – Turora, near the carrot growing town of Ohakune. Ohakune is actually quite a quaint cute town, similar to Arrowtown in the South Island. There was a bit more snow on the Turora side, but the beginners area was super beginners… though it gave me a chance to learn toe turns/stops after spending the last 2 days doing heel turns/stops (and I’ve course falling on my ass a lot).

However, when purchasing the pass we didn’t realise Happy Valley wouldn’t be open.

Now 9 years ago I remember heading up to the next mountain on skis with two of my mates boyfriends who were on snowboards… I ended up falling on most corners due to speed and eventually ending up with skis in my back (somehow). Hence not skiing this time around. I didn’t have fond memories of this mountain in the daylight, let alone nightlight.

So slightly freaking out, but trying not to scare my nephew too much we head up to the lower mountain that is open for night skiing/snowboarding. After seeing the sun start to go down over Happy Valley by now we witness an incredible sunset with stunning colours, clouds and mountains.

And I was too nervous to take out my phone for a photo at this point. Sorry.

So I’d basically talked myself into a terrible ride down the mountain before I even started. Everyone lapped me at least once or twice and I fell a lot… even slid down a steep icy hill on my bum because my board couldn’t catch the hard ice to stop. 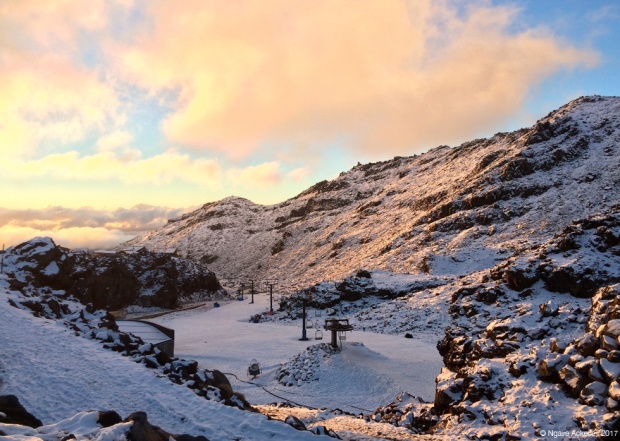 Happy Valley view, prior to heading up to the next mountain

So yes it didn’t go particularly well the first time and I learnt what my mate said about a bad run can really get you down. However, I calmed down and did another run and actually didn’t bail on every corner, managed a few heel and toe stops even! Okay, some of those actually went a heck of a lot better than I planned, but still! I definitely learnt if you have a bad run, just tell yourself you can do it, stay positive and end on a high note rather than going home disappointed of how crap you are.

Me and my nephews – on our last morning

So, my nephew is now a pro skier at the age of 8 and I’m learning not to suck as much at snowboarding. I did get a few comments about my ‘cool’ jacket and my workmate had told me it matters more that you look cool, so at least I had that one down pat… haha.

I’ve go the snow bug now and chipping away at buying the gear so that next season it’s a lot cheaper and easier to organise trips to the mountain. I’ve booked two more trips in for August, a weekend on my own and a long weekend with the family again (in fact I’m probably on one when this post goes live).

I’m determined not to loose the knowledge I’ve got and to improve this season!

Turns out New Zealand is pretty awesome when you’ve got easy opportunities to just go for a weekend drive to the snow. No need for flights, just your gear and a few nights accomodation.

Note: No lasting injuries were inflicted during the making of this blog post. Beyond breaking the skin under my thumb and sticking it in the snow for 10min to stop the blood…

P.S. Excuse the photography quality, all done on my iPhone… will try get some on my decent camera and GoPro shots next time!

9 thoughts on “Adventures in the snow”