Expectations are a tricky thing, even when it’s not a physical thing you expect to see on your travels. 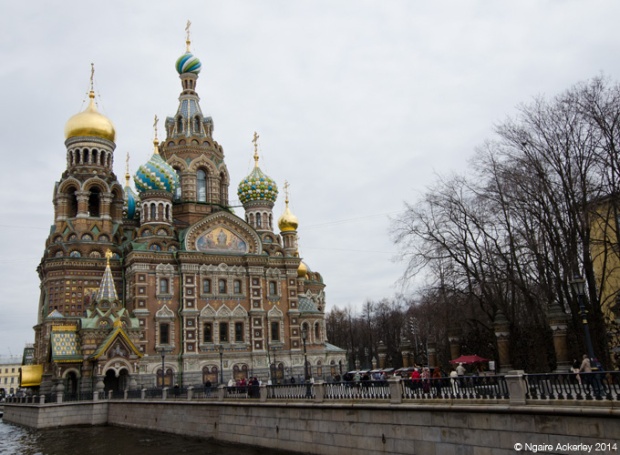 Church of the Savior on Spilled Blood, Saint Petersburg, Russia

I’ve learnt to try not have expectations as it puts a dampener on how fantastic a place actually is. However, with Russia I subconsciously had expected it to feel different to the rest of Europe, in terms of the culture and surroundings.

I think this expectation has been the reason this blog post has taken me a few weeks to write. I keep on hoping that I’ll realise how amazing visiting Russia was. Maybe it was that I’d just come from a teary farewell with close friends in Sweden to Saint Petersburg to start my tour. Then again maybe all the bad publicity that Russia has had over the last few months had put a dampener on it for me. To be honest, I can’t quite put my finger on how of felt about the trip, but I didn’t get the culture shock or feeling of a ‘different’ place that I had hoped for.

That isn’t to say it was a bad trip by any means. I did a tour because I had been concerned about the language barrier and that the writing cannot be deciphered into English letters at all. Was a tour necessary? Possibly not, but it made life a bit easier and the guide was very knowledgable about Saint Petersburg.

Doing a tour enabled me to meet people and be shown the main sights as well as have time to myself to check out the cities. The tour started in Saint Petersburg then an overnight train took us to Moscow.

Church of the Savior on Spilled Blood – Side view

The Winter Palace, part of the Hermitage

Walking through the Hermitage was pretty amazing, it’s more of a palace than a museum the way every room is decorated. That being said, the ‘Winter Palace’ is part of the Hermitage, so maybe that sets the scene for the rest of the buildings. Stumbling across military bands practicing outside the Winter Palace was also a treat, as was coming across a boutique food hall to rival Harrods in Saint Petersburg.

Yeliseev’s Food Hall-room, Saint Petersburg – yes I had to sample a few items…

I don’t generally drink much when I travel and this being a Russia tour meant I was one of the few that didn’t. I was also on a massive budget (other travel plans in the works) and Russia isn’t cheap, so I had planned on just doing the city tours and wandering the cities on the spare days. Whereas, most of the group paid for the optional excursions. So in this sense I guess I didn’t feel part of the group so much, but maybe that wasn’t a bad thing since I enjoy solo travel.

Saint Petersburg provided plenty to see on a day around the city, from Cathedrals to markets, interesting buildings and boutique shops. Doing a car tour out to the blue naval Cathedral of Saint Nicholas and also to the Peter and Paul Fortress was also interesting because both hold important history for Saint Petersburg. The Cathedral of Saint Nicholas has never been closed even in Soviet times and The Peter and Paul Fortress is the birth place of the city and holds the graves of many of the past rulers of Russia since Peter the Great.

The third-class overnight train to Moscow from Saint Petersburg wasn’t nearly as bad as I had expected. I had heard horror stories of overnight trains in Egypt enough to cure me of ever taking one I thought! The beds were hard and small and there were no doors on third class so noise and security was a bit of a concern (I slept with my camera bag under my head), but to be honest I was safe and pretty quiet considering. Everyone was in the same boat (or train in this case) and just wanted to get a bit of shuteye before arrival.

3rd class on the overnight train to Moscow 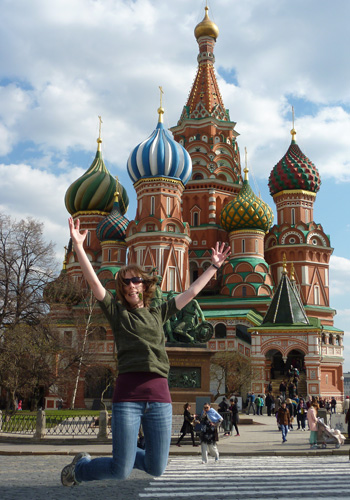 Being in the Red Square was like one of those ‘pinch me’ moments. ‘I’m actually in the Red Square of Moscow, I never imagined that’. However, the Red Square didn’t wow me. Yes the stunning Saint Basil’s Cathedral was at one end colourful and standing proud. The Kremlin and Lenins Mausoleum were on one side, but opposite those was a massive expensive shopping mall (one that could rival the likes of Milan). So, I guess I was missing that ‘Russian’ culture vibe. 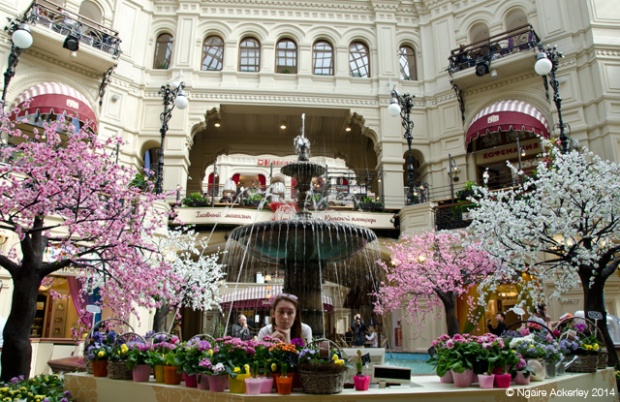 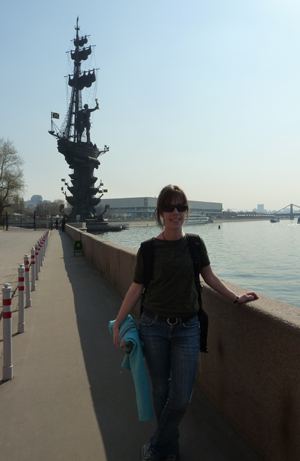 The free day we had in Moscow saw my roommate and I venture out early through the enormous Izmailovsky Market filled with Russian ‘ Matryoshka’ dolls (amongst other things) for hours.

We checked out a few of the Moscow metro stations filled with sculptures before heading to the Church of Christ Our Savior. It is yet another beautiful white church with gold turrets and when you get a closer look you begin to notice the detailed sculptures on the sides of the building. Then there was its location, across a bridge with the river below and the statue of Christopher Columbus, sorry I mean ‘Peter the Great’ (the head had been chopped off because America didn’t want the statue, and Peter’s head was put on instead) was just down the river a bit.

Cathedral of Christ the Savior, Moscow 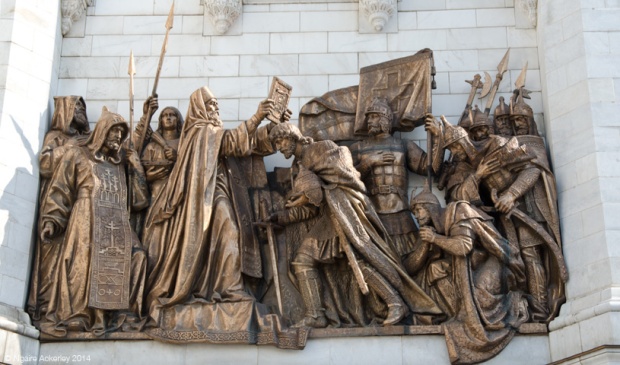 Statues around Cathedral of Christ the Savior, Moscow

Statues around Cathedral of Christ the Savior, Moscow

I was pleased that I let my budget stretch to doing a night tour of Moscow and was finally able to make use of the tripod I’ve carted through Sweden and Russia. Capturing some incredible buildings lit up at night was a great way to end the tour. 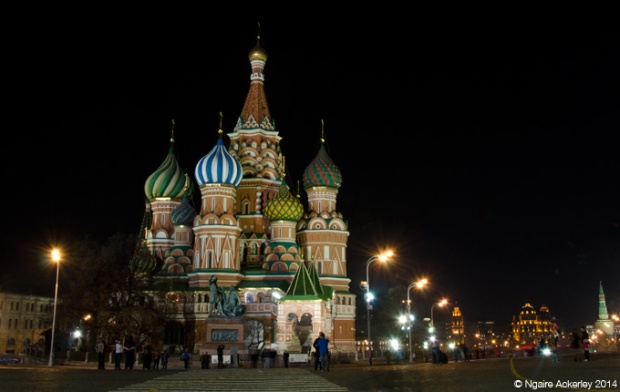 With plenty of spare time in Moscow and Saint Petersburg, I managed to do plenty of people watching in the sunshine. It’s safe to say tourists will always look out of place. Russian women seem to take a lot (I mean A LOT) of pride in their looks. The men dress tidy, but not always to the extent on their counterparts. I think I’d get tired very easily if I had to put that much work into myself getting ready each day before I leave the house, but maybe that is just the traveller in me…

So while I was missing a bit of a culture shock, Russia was still amazing for its history and architecture and I’m sure in years to come I’ll look over these images and hardly believe I was there.

P.S. Unfortunately I wasn’t able to get a shot glass from Russia to add to my collection of a single shot glass from each country (gutted). If you’re travelling to Russia anytime soon and can help me out with a cheap shot glass please get in touch! Email ngaire@designack.com and you’ll make me a very happy Kiwi!

If you would like to see the photography post of the Church of Our Savior on Spilled Blood, you can visit it here »

If the Hermitage is of interest, then this post if for you »

Or, if you fancy checking out my photography you can visit my gallery on Russia here »

I also wrote a few guest posts on Russia, which you can find out more about on my ‘Published’ page here »

7 thoughts on “Travelling around Russia”